Managed by Abbeyfield Wales Society, Eleanor Hodson House is located in the suburban town of Caerleon. A town of archaeological importance, Caerleon is the site of a notable Roman legionary fortress, Isca Augusta, and an Iron Age hillfort.

Since Sir Mortimer Wheeler excavated the amphitheatre in the 1920s, archaeological investigations have been carried out regularly, usually in advance of new buildings. Each excavation adds another piece to the jigsaw puzzle, and the picture of Roman Caerleon becomes clearer. Eleanor Hodson House is one of the more recent pieces to be added to the puzzle.

The roman fortress at Caerleon was founded in c AD 75. For over 200 years it was the base of LEGIO II AUGUSTA, the Second Augustan Legion, one of thee legions heading the garrison of Britannia. The legion was supposed to consist of 5 – 6k men, but detachments, or even the whole legion would often be sent away from the base for other duties, such as building Hadrian’s Wall. A town grew up outside the fortress to cater for the soldiers’ needs.

Although Lodge Hill was outside the fortress town, it was not empty countryside. In 1848/9, the remains of two mosaic pavements were discovered, from Roman buildings on the lower slopes of the hill. Further mosaics, together with carved stones and pottery jars, have come to light from time to time since then. Archaeologists believe that the main road to West Wales left the northwest gate of the fortress and crossed the Pillmawr before carrying on towards Cardiff, but it has never been located.

When it was decided to build the Abbeyfield Extra Care House, Gent Health Authority (the original owners of the land) commissioned a study to see whether the building work would disturb any Roman remains. Some traces of Roman occupation were found, but nothing significant.

It was only when British Gas workmen came to re-route a gas main which ran through the site of the new building, they found pits containing Roman pottery, and cobbles which looked like the missing Roman road. As a result, the Glamorgan Gwent Archaeological Trust, with the National Museum of Wales, carried out a five-week excavation in advance of construction, funded by the Abbeyfield Extra Care Society. Archaeologists also watched while the contractors were digging the foundations and the drains and landscaping the area around the new building in case any further remains turned up. 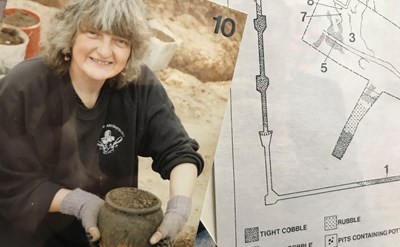 One of the pots was discovered completely intact 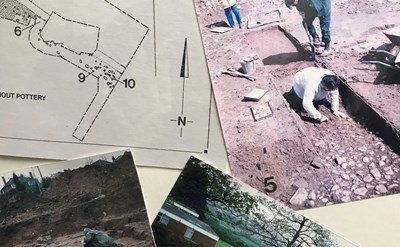 The aim of the excavation was to find out more about the presumed road and any other Roman remains in the area of the new building. It is not certain that the cobbles surface found in the gas trench was the road they were hoping to find, since it was very thin and showed no signs of wear, and there were several other cobbles surfaces in the excavated area. One of these was a path leading diagonally across the hillside in a shallow cutting, past the corner of a small square building. This part of the site appears to have been deliberately landscaped by the Romans.

Also discovered were a well, a ditch and a pit. Only the top of the well was excavated, but it seems to have tapped into one of the many springs on the hillside. Like the ditch and pit, it contained pieces of pottery which show that the site was used from the end of the 1st century, and that the building was probably put up early in the 2nd century. Some of the pottery filling the well and the ditch, however, was not thrown away until c AD 150.

Today Eleanor Hodson house is home to residents of Wales who enjoy knowing they're living amongst some of the oldest Roman history of the country. A special feature has been made within the house to educate those visiting on the history of the house and is always something of a talking point.