A tribute to Richard Carr-Gomm

Neil Adam Mackay is a multidisciplinary artist and former friend of our founder, Richard Carr-Gomm. As a tribute to Richard and his vision, Neil painted an almost life-size portrait of Richard.

As a friend of Richard Carr-Gomm, Godfather to his grandchildren and a true admirer of his mission and vison, Neil couldn't help but paint this fantastic, almost life-size portrait of Richard conveying both his dignity and strength, whilst also showing his vulnerability towards the end of his life.

Neil got to know Richard through his late partner and became a friend of the whole family since the age of 22.

Neil said “I enjoyed painting this portrait of a friend Richard Carr-Gomm. Trying to convey the dignity and strength of the man, whilst showing his vulnerability towards the end of his life.

"Richard founded a number of charities including The Abbeyfield Society, each with the simple aim to care and house the disadvantaged and lonely. He had been greatly affected by his time in the army in the Second World War where he was one of the first Officer's at the liberation of Bergen-Belsen concentration camp.

"This experience and his time immediately after the war, travelling through Europe culminating with the meeting with Billy Graham in 1954. The following year he left the army and became a home help in London’s East end, earning the nickname in the newspapers of the 'Scrubbing Major'.

"With his army gratuity he bought a house, 50 Eugenia Road in Bermondsey where he invited two people who needed help to share it with him. From that small beginning, The Abbeyfield Society was born and grew to over 400 houses in over 7 different countries. A remarkable man with a remarkable vision."

Anyone who came across Richard would know his ability to include people and draw them in.

You can read more about Richard Carr-Gomm's story, vision and mission, and The Abbeyfield Society's heritage on our About Us pages. 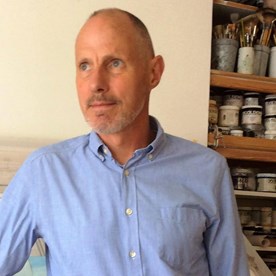 Neil is a multidisciplinary artist who has studied, taught and practised art, and art history in a career spanning over 30 years.

He possesses a wide skill set with broad spectrum of creative disciplines, including bespoke murals, trompe l'oeil, figurative and architecturally images, grotesque-arabesques, chinoiserie as well as abstract and decorative designs.

Neil has worked on a range of projects from figurative paintings or abstract images, all with the aim of helping his clients to
develop their ideas and bring them to life.