Chris Nicholl has a charity football match held in his honour.

There are many famous figures from the world of football to have a trophy named after them. Normally you would have to be an international superstar, or have had a major influence on the game. However, the 'Chris Nicholl Trophy' is named after a former player and manager who, although not enjoying world fame, is hugely respected in Walsall and Southampton, where he spent much of his career and now lives with us at Abbeyfield dementia-friendly care home, Speedwell Court.

When he lived in Walsall, he could not walk down the street without someone winding down their window to talk to him. He had a tremendous influence on many famous faces in the game and counts some legends, including as Lawrie McMenemy, as personal friends.

The inaugural Chris Nicholl Trophy match was played in June between a Midland Legends and a Southampton Legends team, with the former securing a 4-1 victory. Many stars from Southampton FC – where Nicholl spent a total of 12 years as a player and manager – and Walsall FC – where he managed them to promotion from the old Third Division in 1995 – turned out for the game, including former England international Matt Le Tissier. Nicholl gave First Division debuts to a number of well-known players as manager of Southampton, including Le Tissier and future England captain Alan Shearer, whom he later sold to Blackburn Rovers for a British record transfer fee.

As football fever has gripped the nation for the delayed Euro 2020 tournament, Chris has now spoken a bit more about his life ‘in the beautiful game’.

“I started playing as a young boy with the other lads from my neighbourhood, on the green just by my house. We all gathered there to play, and football was the natural game for us. It was football every day. My grammar school actually played rugby instead of football, but it felt all wrong. I was a natural footballer. Fortunately I was decent at it and was given the opportunity start my professional career at Burnley.”

Chris credits his love for the game to his father. “My dad was my main influence. He played football in Northern Ireland, having come from Belfast originally, and taught me everything I know. We used to go out on the green and practice all the time.

“I’ve remained a follower of some of the clubs I played for, particularly Aston Villa. I’m glad I got the chance to play there, as it was my dad’s club too and a part of our family. It was great to go back to him and tell him that Villa wanted to sign me.”

Indeed, Chris has legendary status at Villa, having captained the side to victory in the 1976/77 League Cup, scoring an incredible for 40-yard left-footed strike which helped take the game to extra time. It is remember as one of the club’s all-time greatest goals.

“My proudest moments,” Chris continues, “were playing for Northern Ireland. I won over 50 caps and scored three goals, which was a great way to honour my dad.”

Chris was never afraid to get stuck into the game and mainly played in defense. “I was quite good at heading the ball, and I had a good jump,” he recalls. “It could get a bit rough – I broke my nose a few times, but it’s all part of being a centre-back. I think I headed too many balls and that’s what has affected my memory!”

Chris is now living at Speedwell Court, our dementia-friendly care home in Southampton. “My daughter lives nearby and recommended it to me. She will often come to see me, and I’m also in regular contact with my brother, who lives in America and is a keen footballer like me.

“I’m very happy here and well looked after. I still try to keep active, and I feel healthy for it. I regularly play golf and might occasionally kick a ball around to show the young lads how to do it. The staff have drawn me up a sports schedule for TV as well so I don’t miss any important matches! I try to watch as much football as I can now, because it was such a big part of my life. So I’m watching a fair bit of the Euros and it’s good to see England doing well.”

After Chris’ playing career he began coaching at Grimsby Town before managing Southampton and Walsall, and he spent two years as Assistant Manager for the Northern Ireland national side.

“I always wanted to pass on what I knew,” he says, “and staying involved in football was important for keeping up my fitness and health. Football was my life, my reasons to live, so I was never going to give it up entirely when I retired from playing.”

Speedwell Court’s Senior Activities Coordinator, Jennifer Varney, said, “When Chris joined he immediately offered to help lead our weekly exercise group for the residents, and it as become more and more popular ever since.”

“It’s important to do it right,” adds Chris, “and teaching is something I’ve always really enjoyed. I also have a general interest in the way the human body works, so I try to improve my knowledge through reading as well.” 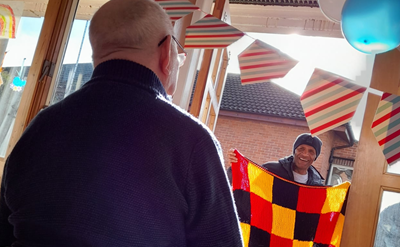 Here's a related story we think you'll like! Des Hodges, resident of Friars Mead care home, is a lifelong supporter of Watford FC, and was treated on his 95th birthday by a visit from former player and Coach Luther Blissett. 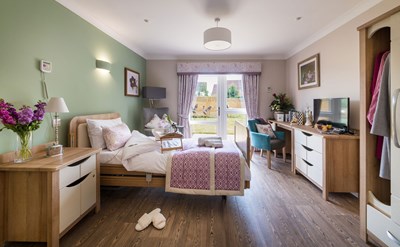 We are committed to promoting health and wellbeing for those who come to live with us, providing purpose and bringing enjoyment to daily life in a charming environment. We are not just a care home, we are a home that cares.

Find out more about Speedwell Court 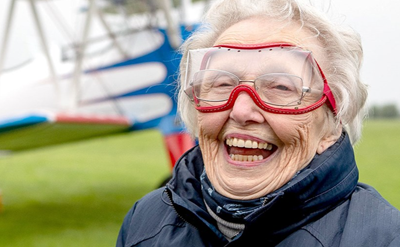 Abbeyfield supports more than 7,500 older people in over 400 homes around the country. Here are some of the real stories of Abbeyfield residents, volunteers and staff.