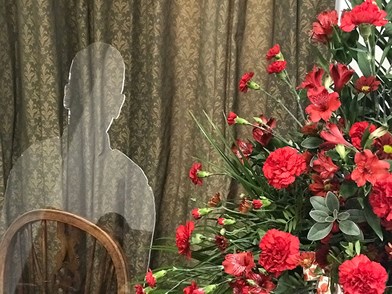 On Sunday 11th November, hundreds of thousands of people across the world will remember those who fought in WWI. The 2018 anniversary marks 100 years since WWI ended so to commemorate the occasion, residents at Darell Jeffreys house invited people from the local community, family members, veterans, cadets and reservists to join them for a coffee morning complete with war memorabilia, stories of war and, of course, cake.

The house was also fortunate enough to be awarded three silhouettes of soldiers by the Armed Forces Covenant Trust Fund as part of the national ‘There But Not There’ installation. The silhouettes served as a reminder of those who fought in our armed forces and as a tribute to those that have fallen.

Whilst none of our residents were alive during WWI, they had vivid memories of WWII. Pearl, a nurse during WWII remembers “convoys of soldiers would come into the hospital, upwards of 40 at a time, all with differing levels of injury and their field dressings were often very rudimental. We would be working until midnight most nights, after a whole day’s shift, removing dressings with our bare hands and treating their wounds.”

She said, “I felt I had to something, I think everybody did. The woman’s war effort was quite something, it was all hands on deck every single day.” 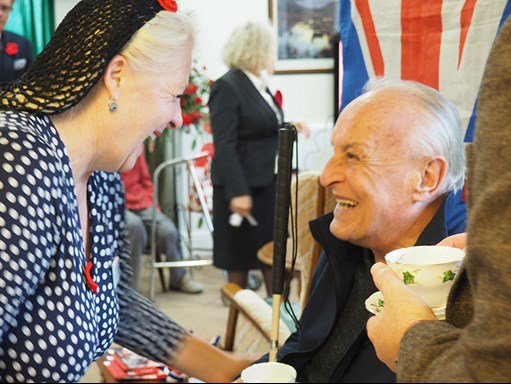 Marjorie was just 16 when WWII started. Living in Portsmouth she remembers being bombed regularly, her father’s shop was even hit.

She also reminisced about her marriage that took place during the war and how her then-boyfriend was only given two days leave to tie the knot.

“My husband-to-be was in the anti-aircraft and he was only given 48 hours leave to marry me! It was of course a bit of a rush but it was wonderful nonetheless. After that he was posted straight to the Middle East and I didn’t get to see him again until three and a half years later, but it was like he had never left when he got back. We were married for 72 years in total.”

Staff and residents were overwhelmed by the amount of people who came to their remembrance event. Pearl said, “I couldn’t believe how wonderful all of the decorations and the poppies looked. It has been so good having so many people in to visit, too.”