As many people throughout the UK will know, Captain Tom Moore challenged himself to walk 100 lengths of his garden before his 100th birthday to support the NHS. Since then, many older people have been inspired by Tom and set up their own fundraising pages to support charities close to their heart, including residents from Abbeyfield.

Meet Peter Robinson, a former engineering teacher, who lives at Abbeyfield Court in Locks Heath, Southampton. He has challenged himself to walking 20km before the end of Christian Aid Week (10 – 16th May) to raise money for the charity.

Peter chose Christian Aid as it is a charity close to his heart. He also stands on the committee for the trust and has previously received the diamond award for long service with them.

By the 1st May, he had already reached 17km so he decided to increase his target to 32km. He has been walking 1.6km per day which is the equivalent of eleven laps around Abbeyfield Court.

With a target of £150 Peter is overjoyed that so far he's raised 758% more with his total standing at £1138. If you'd like to support Peter you can do so by donating to his JustGiving page here.

Peter's fellow residents and staff at Abbeyfield Court have been so inspired by Peter and enjoy watching and cheering him on everyday of his challenge.

Lucy Perry, Senior House Manager, said, "We never doubted Peter wouldn't be able to complete this challenge and knew he'd hit his target in no time. But we never expected him to raise as much as he has and to almost double his walking target. He really is an inspiration and we can't wait to see what he does next." 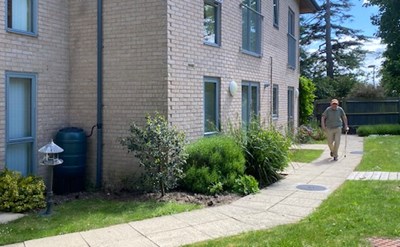 Peter on his daily walking route 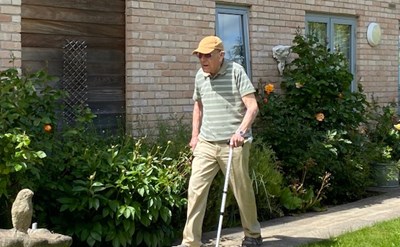 Walking on, or should we say in, sunshine! 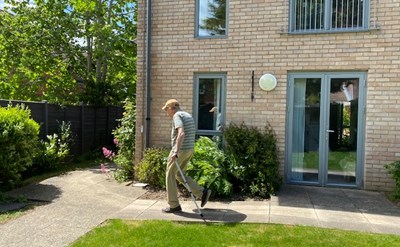 Man on a mission

Peter moved to Abbeyfield Court with his wife in 2019. They choose Locks Heath as they were very local and Marion, Peter’s wife, was involved as a guarantor member when Abbeyfield Court was first set up. She also sat on the league of friends committee many years ago and always knew Abbeyfield Court, Locks Heath would be the perfect place for them upon choosing to downsize.

Back to blog
Scroll to top