“Our first, second and third homes have been in Locks Heath and we couldn’t be happier.”

Peter and Marion have been happily married for 59 years, having recently celebrated their wedding anniversary at their now home of two years, Abbeyfield Court independent living apartments. When the time came for the couple to retire, they wanted to remain in the place they’d called home for over 57 years, and having known of Abbeyfield from past dealings, Marion and Peter knew just where they wanted to be.

Growing Up & Choosing a Career

Life growing up for Peter was good overall, whereas Marion faced some hurdles. Thanks to the paths they choose to take, they became an unlikely couple, before getting married on the 31st March 1962 at St Nicholas Church in Harpenden.

Peter said “I was brought up by an upper-middle class family. My father was a town clerk which meant he was very busy, so I ended up heading off to boarding school – which I thoroughly enjoyed. The war started when I was nine years old but despite it, I had a great schooling, although I wasn’t very ambitious! My father managed to get me an apprenticeship with Vauxhall Motors in Luton (which is where I grew up) and I absolutely loved it. I soon became a toolmaker and went on to become a vehicle parts designer.

“After completing my apprenticeship, I did my national service – I did some time in the territorial army before I was called up for national service because I wanted to get into the Royal Engineers, which I did! I found myself posted to the Intelligence Corps Depot. During my national service, I went on a crash course and was soon sent to Germany where I became a Sargent. I had Sargent's pay and enjoyed the luxury of the Sargent’s mess – I really had a wonderful time. Mind you, I did work very hard for it!

“After being made redundant from my job in motor design, I became a Trainer in electromechanical drafting. While I was there I was given a Computer Aided Drafting (CAD) unit – I got to know this particularly well. After 8 years training, I began working as a civil servant in a skill centre. I stayed there up until, unfortunately, the government closed all the skill centres and privatised them.

“I decided 60 was far too young to retire, so I looked at the papers for another job." – Peter Robinson

"There was a chap advertising for a job as an instructor; with that, I left the skill centre one day and started with him the next. I was completely tech-savvy for a 60 year old man, which was really something at the time. I thoroughly enjoyed the work, but I ended up being made redundant again because of the resection. I then began working self-employed until my 70th birthday. My 70th birthday ended up being my last day of paid work.”

Marion said “My father was in the army and when I was 5 months old, my mother caught meningitis and died in one weekend. My aunt took me and my brother in at the start of the war, before I was sent to my mother’s sister in Kent. When I was two years old, my father remarried. He and his new wife began renting a shoe shop in the middle of the market town Tiverton in Devon. I remember that time well – our toilet was three floors down, across the back yard!

“When I was 12 years old my father came out of the army, by which time my brother had joined as a boy soldier. I managed to get into grammar school and get some O'Levels, which I was pleased with. I had always had a great interest in biology, so after I had been a Brownie, Guide, and finally a Red Cross Cadet, I decided it made sense for me to start a career in nursing.

“At the age of 16 I went to work in a children’s home that was attached to the Princess Elizabeth Orthopaedic Hospital in Exeter, and at 17 I started my orthopaedic training. The Princess Elizabeth Orthopaedic Hospital was affiliated with St George's in London and two other hospitals; one in Exeter, the other in Bristol, I had the choice of where I wanted to go to do my general nurse training, so I chose to go to Bristol Royal Infirmary. After I became a qualified General Nurse, I did a year staffing at the hospital, before heading off on my next training venture; midwifery. I did the first part of my midwifery training in London, and the second in Epson.”

(Photo shows Peter and Marion on their wedding day, and now)

After being set-up on a blind date, Peter and Marion were dubious of each other to begin with. Little did they know, they would be happily married for the next 60 years.

Marion said “When I was completing the second part of my midwifery training, a friend I had made decided she’d got just the bloke for me! I wasn’t too chuffed, but me and Peter met on a blind date and it went from there. After we got engaged, I moved to Harpenden in Hertfordshire as that’s where Peter’s parents had retired. I worked as a Night Sister at the hospital in Harpenden for three months until we got married, but because we were living in a bedsit in a house of mostly bachelors, I decided I couldn’t do night duty any more.

“We then moved to Luton into a flat for a year, I got a job with a Dentist, then with a Health Visitor where I would do baby clinics, visiting children at homes and in schools. It was at this point we decided, it was time to move again. We bought our first of three homes in Locks Heath, it was just a small bungalow, but we liked it. Soon after moving in, we had the first of our two daughters.”

Peter said “Shortly after moving, we realised we did need to get a bigger house, there wasn't much space so we began searching again. After a little while we did find a house that was almost complete by a single builder – we liked it, so we bought it!”

Marion added “Having moved into our second home, we decided to try for another baby, and shortly after had our second daughter. Both our daughters have turned out to be fantastic people, we’re very proud. I didn’t have a job when we were living at our second home as I couldn’t drive, I only had a bike – which I loved.

“I did some voluntary work at our local church (where Peter also looked after the church’s boiler), and one of the ideas we had in the 1970s was to open up an Abbeyfield house called Locks Farm. It became so popular that they built an extension and called it The Stables – that was a membership society. I became a guarantor member of this Abbeyfield we are currently living in, so I have a long association with the organisation.”

Peter and Marion moved into their now apartment at Abbeyfield Court on the 21st June 2019, and they’ve loved every minute of it.

Marion said “The apartments here are purpose built, so it’s lovely! There’s a great garden that’s managed well, but we still look after the hanging baskets and do little bits in the garden as a hobby. We’re on one of the main roads here, so we get to see the busses going up and down, people taking their children to school and so on. It’s nice because we don’t feel cut off from the world, which is something I always worried about when moving into a retirement living facility.

“There are just the right number of people here too (16 apartments), plus we’re well fed, and the manager, Lucy, is lovely! It is just such a relief to still be living in the place we have for the past 57 years, we still feel part of the community because it’s where we’ve spent most of our married life.”

Peter said “We’ve always been very involved in the community – and here we’ve been able to maintain our independence. Marion still runs a car, so she can come and go as she pleases.”

"Our daughters are thrilled to bits that we are here! We haven’t moved away from our home town, yet we’re in an environment that feels safe, warm and welcoming." – Marion Robinson

Marion said “I recently had my first trip out, I sat with a friend and had a socially distanced coffee at the park. I do occasionally take Peter out in the car as he can’t really see now, he can see things but it’s blurry, so it’s good for him to get out on occasion.

"This is just the perfect place for an Abbeyfield House to be, it’s near a shopping centre, a local hospital (outpatients, x-ray, physio), community spaces and so much more. We're so happy here.”

Peter and Marion recently celebrated their 59th wedding anniversary where they enjoyed a special cake and dinner at their apartment. Marion said “We’re looking forward to our diamond anniversary next year, although in this day and age you can’t really make any plans!”. 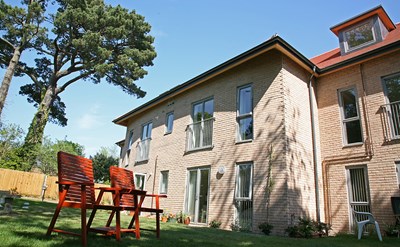 Purpose built in 2011, Abbeyfield Court offers older people independent living in 16 secure apartments with one or two bedrooms, in a sociable environment just outside of Southampton. 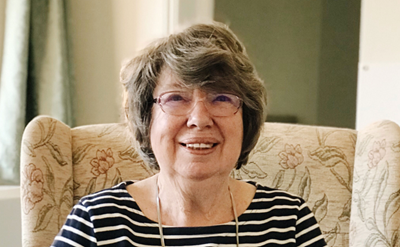 Independent Living is designed for active, self-reliant individuals. It allows you to live completely self-sufficient with communal hubs to socialise and connect with your neighbours. 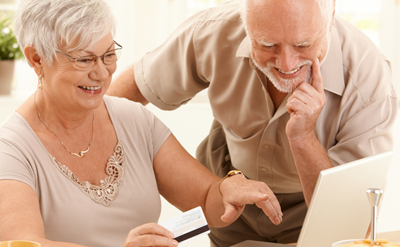 At Abbeyfield, we understand how important it is to live with your loved ones. That's why we have homes all across the UK that are able to accommodate couples.

Search for a retirement home