6th June 2019, marked the 75th anniversary of the D-Day landings at Normandy. The day was commemorated across the UK, France and USA and even in our very own Abbeyfield Newcastle Society.

6th June 2019, marked the 75th anniversary of the D-Day landings at Normandy. The day was commemorated across the UK, France and USA and even in our very own Abbeyfield Newcastle Society. 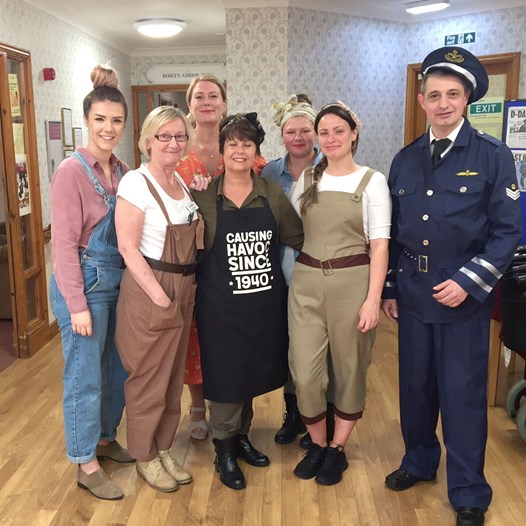 Both homes ran by Abbeyfield Newcastle, The Grove and Castle Farm, came together for a day of stories, singing and a themed quiz. Family and friends were invited to join in the day’s celebrations and enjoyed hearing from residents who both served during the landings and those that had family serving.

Staff and residents all wore clothes reminiscent of wartime England and the house was decorated with props and memorabilia from the 1940s. Staff went even further to make the day special by creating ration book menu cards and served a meal of Farmer’s pie followed by jam roly-poly and custard.

A family member of one of our residents said, “I wanted to say a big thanks to all the staff for making June 6th something special for the residents. Mum really appreciated it and was able to tell me about it on the telephone last night. I have just received some pictures via the newsletter and loved the way you all dressed up – Brilliant!”

What are the D-Day Landings?

The Normandy landings, now known as D-Day, saw the largest seabourne invasion in history. Beginning on 6th June 1944, allied troops began the liberation of Nazi-occupied France, and laid the foundation of victory on the Western Front. Today, the anniversary of D-Day pays tribute to all those who fought and made great sacrifices to WWII.