Gilbert (88) an avid supporter and previous season ticket holder at both Nottingham Forest and Nott’s County football clubs was able to meet Nathan Tyson, an English professional footballer who has played for both teams thanks to Deputy Manager, Jasmyne. 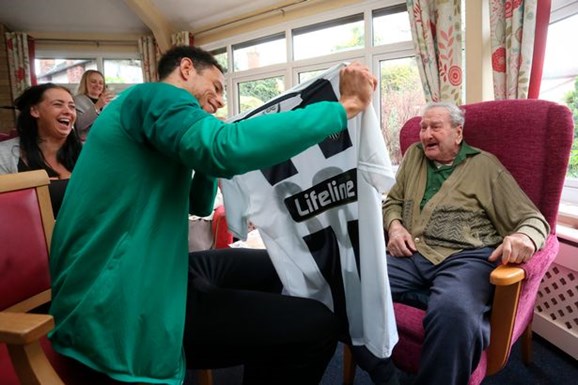 Gilbert has been living at Sycamore House for the past five years. Prior to living with Abbeyfield he lived in Awesworth, a small village in Nottingham. He was an engineer in a gun factory, before spending many years playing centre-half in amateur football on a Saturday afternoon.

It’s not often you find someone supporting both Nottingham Forest and Nott’s County football clubs, but Gilberts family supported them and had friends who had season tickets for both teams.

Deputy Manager, Jasmyne recently created ‘Make a Wish’ for the residents at Sycamore House to write down a wish that could be anything from meeting a celebrity, going on an outing or bungee jumping. Jasmyne understands the importance of doing regular activities and helping the residents to reminisce, but she also wants to create memories whilst they are living with Abbeyfield. Her aim is to fulfil as many wishes as possible for all residents with the very first being for Gilbert.

“I really enjoy working for a charity that supports this kind of work and I am very excited to see Gilberts wish come to true, Gilbert is such a joy to be around, he is very friendly and makes everyone happy” 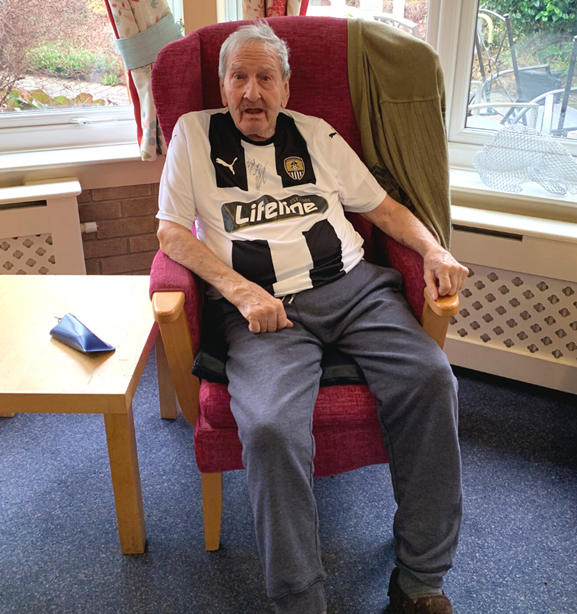 Jasmyne contacted Nott’s County Football Club and explained that one of the residents had made a wish to meet a footballer who played for one of the Nottingham clubs, and who better than Nathan Tyson, an English professional footballer who has played for both teams. The club were more than happy to meet Gilbert and within a week, they arranged their visit.

With him, Nathan brought a home football shirt which the club had printed for Gilbert with his nickname ‘Gib’ and his age ‘88’ on the back, which Nathan presented to him and shortly after signed for him.

He spent some time talking to Gilbert and told him that he would like to see him at the game, wearing his shirt and that he will get the rest of the team to sign it for him – that is the next part to Gilbert’s story, he is hoping to get to a home game.

Gilbert was joined by his sister, Maureen (93) who has lived at Sycamore House for two years. Maureen was an office and shop worker and ran Ruby’s Confectionary named after their sister Ruby, who ran the shop alongside her. Maureen said it was lovely to see her brother get his wish and look on as he was greeted by Nathan.

“I am so happy that Nathan has come to see me today and I have been able to shake his hand, it was a great surprise!”

A truly wonderful story and great moment for Gilbert. Let’s hope he is able to make it to the home game!